International Art Festival? Interactions? is the most important cyclical project organized in Poland, order presenting such areas of art as performance, happening, actionism, conceptualism, as one of the most important artistic practices of the discipline broadly defined as "live art - living art". ? Interactions? is a festival with a 13-year tradition, one of the oldest consistently built cyclical projects in the world. ? Interactions? show both phenomena already known and recognized in contemporary? living art? (mainly performance) as well as young, seeking art, which often cannot be clearly classified as defined genres. Both the so-called classics of the genre who started their creative path back in the sixties and seventies, as well as young artists unknown to a wider audience. For young artists, the festival is a great opportunity to confront their experiences with the experiences of older artists. About 250 artists from over 30 countries around the world have presented their performances at the festivals so far. The diverse program of the Festival is addressed to audiences from various age and social groups, promotes active participation in culture, and increases the role of artistic creation as an important tool of social communication. The festival is part of a 5-year project entitled "A Space For Live Art", co-financed by the European Commission under the Kultura 2007-2013 program. The program of each edition of the Festival is built on the basis of the person of the artistic curator, which allows to present a certain coherent opinion about this art. Then the festival is more than just a set of names. Such a view allows us to see in the multitude of forms of contemporary art something more than just individual artistic decisions, but also trends and tendencies, regional dependencies, the influence of different cultures, civilization contexts, and historical experiences. XIV International Art Festival "Interactions" presents the diversity and current trends of European live art. The festival consists of two parts:

The artistic program of this edition of the festival was created together with curators from Germany, Spain, Great Britain, Slovenia, France, Finland, and Belgium. The choice of these countries is related to the implementation of the European project "A Space For Live Art", which includes the "Interactions" Festival. Our foreign partners selected the most representative artists for a given country. They will have an influence on the shape of this edition of the festival incl.

As part of the additional program, called by us "Off Interactions", some very young artists will be presented, for whom participation in the festival is often an artistic debut. The curator of this part of the festival is Janusz Bałdyga. The festival is not only an overview of the current work of the invited artists. They are also theoretical presentations including exhibitions, meetings with authors, open lectures, workshops and discussion panels. The above-mentioned forms are carried out by artists participating in the festival as well as critics, art historians and academic staff of art universities. 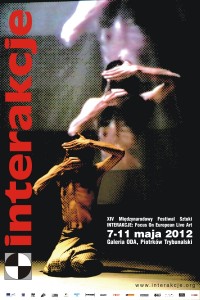