Day two of the festival - real

The prelude to the program of the second day of the festival (May 10) were actions in the city space - on the Tribunal Square, performed by participants of the workshops Johannes Deimling.

At 4 p.m. in the gallery at ul. An exhibition by Przemysław Kwiek has opened on Sieradzka Street. The artist showed video documentation of the action, pictures and computer graphics. He also arranged the space with props from his actions. 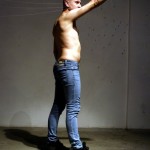 The evening program of the second day of Interactions started with a performance by Przemysław Branas. It was a type of exercise performance, although apparently nothing was happening. The artist was standing in one position all the time with his arm outstretched. The forearm was entangled with veins, the ends of which were hooked on hooks on two walls of the gallery. As the performer's hand fainted, the veins dug into his body more and more, cutting through the skin. Finally, the artist, lowering his hand in a decisive movement, tore the lines and freed his hand. This is not the first performance in which Branas examines the endurance of the body kept in a static position for a long time, which is subject to external factors. In 2010, at the Fokus Łódź Biennale in Łódź, lying on the floor, he held a burning candle in his outstretched hand. Melting wax dripped down his hand. At Interactions, he showed a body trapped in a no-go position. Holding my arm up made my muscles ache all the time, and trying to lower my arm made the lines stick harder into my body. 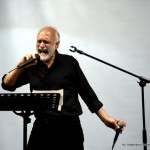 Giovani Fontana's performance consisted of working with the voice and with the word. The protagonists of the poem read during the performance were Sirens - tempting and killing people with the beauty of their voice. The artist showed a number of vocal possibilities - from whisper to scream, from primal inarticulate sounds expressing fear, pain, effort to a stream of words. The sound system was an important element here. The artist used one or two microphones, brought them closer and further away from his mouth, put them in his mouth, placed them against a loudspeaker. It also caused feedback of microphones, which resulted in a piercing, high-pitched sound. The sounds made by the artist overlapped with the sounds of his voice on the recording. It can be said that due to this action the sound acquired a certain spatiality, similar to the echo effect. 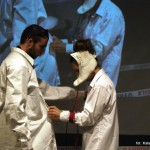 In this performance, the artist juxtaposed opposing concepts: fire and ice, connecting and dividing, live action with the image projected onto the screen, silence while performing an action with a female scream heard from the recording. One of the elements that made a significant difference in her speech was the characteristic skate mask that the artist wore on her face (the same mask was put on by an audience member invited to participate in the performance). The ice cube also seems to be important details - the element that opens and closes the action, the use of contrasting colors? white and red (white ice cube, red? candlestick ?, white shirt, red string). Thanks to the latter, it was possible to obtain visually interesting, aesthetic scenes in the performance.

Rheaume's multi-element performance was complemented by a real-time projection onto the screen, making it possible to see the action and its documentation at the same time. The projection also gave a sense of depth, multiplying some scenes.

The artist, using her body and props, created a poetic performance that primarily influenced the viewers with its visibility and sophistication of individual scenes. 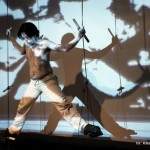 In Villariba's performance, we can see some analogies with the performance preceding his action. His action was also in some way? Painterly? and poetic. An important element of this performance was the projection on the screen, consisting of black and white stripes, against which two ropes were hung. The screen displayed a computer-simplified silhouette of the artist. Villariba started the performance and painted his body white. He climbed the ropes looking for the right balance, "suspended between heaven and earth."

The artist blended into the background, he was an integral part of the projected image, and its complement, also in terms of color, was a red circle, which the performer placed a string on his torso. The performance, based largely on the play of light and shadow, white and black, was accompanied by music. 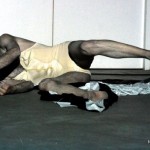 Mehdi Farajpour graduated from theater studies, but his activity is more associated with performance. In his activities, he combines elements from theater, poetry and Butoh dance. He has also developed his own dance method called "Meditative Dance". Choreography was also essential in the performance at Interactions. The rhythm of the performance was given by the sound of the typewriter. The room was darkened. The performer, just like on the stage in the theater, was illuminated by a punctual, strong light. The artist started the action standing against the wall covered with a black cloth. Europeans instinctively associate a black figure with a covered face with an Islamic woman. The artist's gestures, performed slowly, thoughtful and refined, resembled a dance. Under the black cloth the artist pulled out a letter, read it, and tore it up. He threw back the black veil. Viewers saw a pale, slim figure, as if blinded by a strong light. The artist exposed himself to the audience in a way. Farajpour's performance can be interpreted as an attempt to define one's own identity, define one's place in the world where a person tries to conform to certain laws, and in the event of breaking the pattern, there is still confusion and guilt. 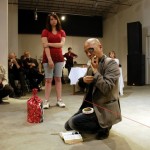 The key to the artist's three-part performance was paper, which functions not only as an indispensable element for the production of a book or notebook, but above all as an information carrier. In the first part of the performance, Gim Gwang Cheol used images of famous people from history, juxtaposing Hitler and Marilyn Monroe, which he put on his face, previously covered with colored foil. The author destroyed the paper props used in the performance - he chewed and spat them out.

In the second part, he concentrated on the written word. The book was the main prop here. The artist torn pages from it, crumpled them, threw them away, and stuck them to his own face. The book placed on the floor was the center of the two red perpendicular lines marked by the artist. Their arrangement as if marking the directions of the world. The performer also used a measuring tape with a pull-out tape measure, which he more and more unfolded and threw at the audience as if he wanted to reach some point.

In the third part, the artist used a newspaper. He began by reading it, then performed a series of manipulations on it which made the information carrier transformed into an aesthetic object. The artist cut the paper, rolled it, twisted it until a form resembling a plant was created.

In this complex, multi-element, somewhat theatrical performance, several meanings can be perceived intuitively. One is the reflection on the value, durability and meaning of the written words. Another is ecology, the relationship between nature and culture, because, as we know, paper is obtained from trees. The third way is formal interpretation. The artist worked manually all the time - he approached paper as a material in a sculptural manner, giving it new and new forms. 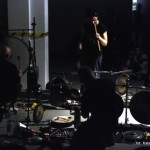 The artists presented a musical performance - a concert based on ethnic instruments and rhythm.