Born in Poland in 1970 and living in Finland, Szrama’s practice shifts between multiple disciplines, including photography and video. Regardless of the medium, a dominate common thread in all of his work is the use of his own body and methods of performance art, such as action, gesture, and the physical manipulation of everyday materials. Szrama’s work is humorous and self-reflexive, often putting his own body into impossible and even ridiculous situations such as attempting to hang himself with helium balloons, covering his entire body in plaster cast making himself immobile and then waiting for hours in a busy tourist street, or boarding a plane with his own parachute. His work touches on themes of travel, trust, and the ever present potential for personal failure.

I am fine and I’m scared to death
I do not have any fixed views. I do not believe in any system, or any absolute truth. The world is evolving. Cosmos expands. As I age, I have more doubts. My art is in a constant flux between sincerity, humor and complete despair. I
am frantically trying to capture the essence of a situation, a state of mind. My performances are a forum, a space in time for interaction with the audience. I hope that in my desperate gestures viewers will find for themselves something meaningful, even transcendent. I still naively believe, that anyone can create a phenomenon on a cosmic scale and I feel it will be a meaningless sacrifice of an insignificant man. 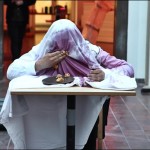 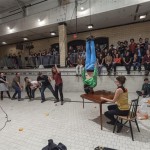 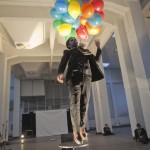 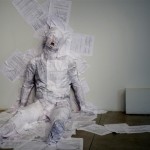