Roi Vaara is internationally very well recognized performance artist. Born in Moss, NO, 1953 from Finnish parents. Studies: University of Art and Design, in Helsinki 1972-75, Jyväskylä University, FI, 1976-77. Performances since 1982 and since 1988 he has performed in artists’ collective Black Market International. Presented more than 300 different performances, taken place in more than 200 international exhibititons/festivals in about 40 countries. In 2001 Vaara organized EXIT Festival, „Woodstock Festival of performance art” which presented live works of 300 artists. Vaara received the State Prize for Art from the Art Council of Finland in 2000 and Ars Fennica Prize from Henna and Pertti Niemistö Foundation in 2005. In 2010 Vaara was awarded with the Pro Finlandia Medal of the Order of the Lion of Finland. He lives and works in Helsinki, Finland.

The moon is exactly the same apparent size from earth as the sun. So what?
Everything is under control. Research and 39. Wikileaks.
Order and disorder are man made concepts. Pieces of the puzzle. Do you follow?
Who in the multiverse do you think you are?
John F. Kennedy, elected president in 1960 and assasinated in office, had a Lincoln for a secretary, while Abraham Lincoln, elected president in 1860 and assacinated in office, had a Kennedy for a secretary. Makes sense? Bells ring. Mind the gap.
No entry. Nothing. And that’s the way it is. Man has been on a bad trip for a long time. Take a number. Turn left. Think in other categories.
For example: lots of fun. Are you being served? More To Fu? Rotten tomatoes and other vegetables? Where’s the beef?
When you see something, say something. The only intelligent way to discuss politics is on all fours.
I have nothing to say but money talks. When money talks, shit happens. Slippery when wet. Bullshit makes grass grow. Get high!
Very interesting… Is everybody happy? The medium is the message. This is performance art. 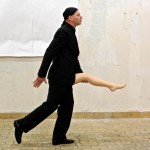 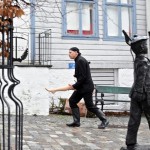