Born in 1974 in Sherbrooke in the province of Quebec, she graduated with honors from the University of Quebec at Trois-Rivieres, Canada, Bachelor of Arts (BA). She finish her master’s degree in Fine Arts at the University of Quebec at Chicoutimi. This master was developed in collaboration with the „Dartington College of Arts, England, where she received a training in Visual Performance (MA). Michelle Rhéaume artistic activities are focused on the animation of interdisciplinary forms, between the practices of relational and installation art. Her [RE]FLEX]ACTIONS stands up in [RE]ACTION (or in response) to the lack of flexibility and depth of our human relationships. The sources of inspiration are often the distinctive phenomena and/or the marks of her body. Her [RE]FLEX]ACTION are tests in which she portrays the dualities, failures and ambiguities which veil the unspeakable. Thus, the perceptible limits of suffering can be explored and fragility takes the right to expose itself. She worked as an art events curator and she covered action art festivals as a writer. She showed presented her work in England, Ireland, Belarus, Poland and Quebec/Canada. As part of INTERACJE festival she expects to build a shared experience imprint of lyricism and strangeness. The artist works and lives in Montreal. Michelle Rhéaume

Initially, my work was articulated around a sculptural mechanic which executed on my behalf interactive performances. Since 1999, my practice operates a landslide, ranging from mechanical to organical, from the body object to the body subject. In my work, I conceive and perceive the body as a poetry vehicle. The body that I’m talking about is a singular language that carries all experiences from which it has been constituted until now, as much of his becoming.

That somatic language, which avoids the mimetic or dramatic framework, can actually transform itself into an alive, multidimmentional and interrelationnal poetry. This can happen when the presence, which is inherent to the body, trancends what is actually seen or looked at by the audience. My sources of inspiration are often the distinctive phenomena and/or the marks of my body. Nevertheless, the sculptural issue remains at the center of my artistic activities with regard to my relationship to the body, to the space and to the way I conceive contact with the Other.

My work questions the blurred areas of the body, it explores its edges and points to this „phantom articulation” which is beyond the discourse conveyed by my body art. Thus, a possesion image takes shape, facing our unknown part. To mark a body or a place, it is to transform its memory in time, it is to take possession of it. By following this [in]tention, I create and [in]corporate [ex]tensions similar to the body mechanics. Therefore, a „metamorphosed body” emerges and generates from me other movements and attitudes. The extension acts as a marking principle, it embodies the transition between inside and outside, indicating to the Other the interaction area. By doing so, I question the boundaries as well as the borders, until the foreign body limits (the Other).

I define my practical research as [RE]FLEX]ACTION that stands up in [RE]ACTION to the lack of flexibility and depth in our human relationships. My intention is to transform strangers meeting into a discoveries laboratory where the area of representation gives way to the exchange. Thus, the perceptible limits of suffering can be probed and the fragility takes the right to expose itself. My [RE]FLEX]ACTION are tests in which I try to portray the dualities, failures and ambiguities which veil the inexpressible. My [RE]FLEX]ACTION invoke the emotional realm through a process that aims to put my body at the threshold of it’s physical limits. From this arises the necessity for the spectators to act. I do not intend to fill others with emotions, but to create the condition of a feeling community. Through progressive rhythm, the action moves from an oppressive to a liberative tension.

My relational practice seeks to displace limits, to change behavioural attitude between strangers, the artist and the public, the public and the public, and to destabilize obviousness in order to create an art that is shared. I attempt to break the passive role of the public, making them responsible in the [RE]FLEX]ACTION through their implication. Even if nowday it is taboo to talk about sense and meaning, we all together inscribe meaning in a REFLEXACTION. 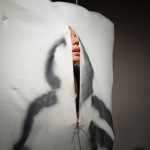 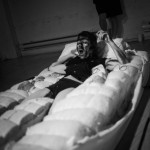 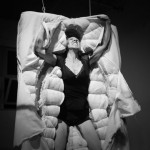 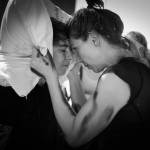 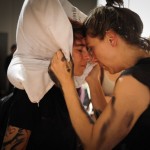