3rd Day of the Interactions Festival

The third day of "Interkcja" revealed more fields of dialogue. This time, the relationship between the past and the present generation, rising and setting, and the diametrically different approaches to the issue of time have resounded. The young generation feels the approaching end and the specter of the impending catastrophe, while the old ones make claims of immortality. Linearity and the sense of time turn out to be surprisingly relative. This wave also revealed the master-student relationship and a number of conventions that result from it: the need to become independent, overthrow authorities, and at the same time need them. Another field of dialogue is the female thread which is in the process of becoming. It is femininity in the process of going beyond the patriarchal framework, constructible, unstable, looking for its place beyond the male idiom.

Mariola Albinowska works in public space based on relationships with people. Its operation during the Interaction was dedicated to the city and its inhabitants. The artist wandered the previously chosen trail in a protective suit. She looked like she was traveling the world after an ecological disaster. The yellow elements of the outfit were a warning element. In a florist's shop, she bought flowers and distributed them to random people. She aroused interest mixed with fear, as if she were impersonating a character from the future, a prophet who knows what fate awaits the Earth with such careless use of its resources. During the walk around the city - which turned into a specific zone for the duration of the action - strange and surprising things happened. The artist introduced a dissonance, shook the structure, and infected the urban ecosystem. Its action, positive and focused on contact, brought a bitter reflection in the undertone that the ecological destruction is invisible, it is happening here and now, but in the everyday life of a small city the problem of global warming and dying species is still abstract.

Przemysław Kwiek organized a special committee. It was made up of tables covered with newspapers, with collage boards behind them, an information board, books and rubbish scattered around them. On the board there was the artist's name, numbers and words. The artist invited his fellow artists, aged 70 plus, and proclaimed the founding of the Polish Academy of High Art. Everything was done in a solemn, pathetic tone. The members of the newly established university had a mesh over their mouths, symbolizing censorship. Lenka Klodova, a Czech artist, also had one, but she was sitting among the audience. This type of activity, establishing a collective in the face of political and social changes, brought to mind associations with other initiatives of this type, such as the Association of Other Arts Artists. Kwiek gave a passionate speech on the need to formalize the group in the face of the fascist and totalizing tendencies of the Polish government. The situation itself was very pathetic - a reflection of the wider tendency that pathos breeds pathos, and the response to totalitarianism is a different kind of total experience. There were questions from the audience: "Why are there no women in this Academy?" Kwiek replied provocatively pointing to his colleagues: “How is it not? Each of them has a wife. " Voice from the audience: "And thanks to these women you can be artists!" Kwiek's actions caused slight consternation and discussion, which moved to the sidelines. It provoked some reflections. On the one hand, we are dealing with a generation of artists whose youth was in the 1970s and whose development could not run smoothly due to the oppressive communist system. The boys of the Polish People's Republic in Poland also remained in a niche after the transformation. The baton was taken over by the younger generation. At the present moment, their voice is also blocked by an authority that only proclaims the correct worldview, and this kind of oppressive ideology is otherwise well known to them. Thus, the youth and old age of Kwiek's peers fell within the time of the regime. It is not surprising that their need to rebel and remind the art world of their existence is growing. The flip side of this action, however, is that the perspective they adopt is similarly totalizing as the system they are opposed to. The position of women in the male art world, which is still very patriarchal, is puzzling - the scream of young performers cannot move this monolith. What is the high art they talk about? What is the criterion for being a member of the Academy? The work of the committee resounds with frustration and fatigue with constantly proving to decision-makers the quality of the art they create, but also anger, desperation and incredible energy that is generated when there is nothing left to lose. Kwiek talks about the role of the elders in each generation, the sages of the clan: “This is the moment to establish the Academy of Immortality. But do not worry. It will only take a few years .. "

The duo Nadia Markiewicz and Grzegorz Demczuk made the audience full of the celebration of the end. It was held to the sound of newspaper headlines announcing the end of the world, but the word world was erased from them. Viewers received tubes with shot confetti and instructions on how and when to use them. You have 10 minutes left. Everyone waited for the end excitedly, the last ten seconds were counted together. In the final moment, the room was filled with swirling confetti. Silver dust fell slowly to the gallery floor, accompanied by delight and smiles. The viewers tossed silver particles and danced among them. Miłosz's phrase "There will be no other end of the world" is recalled, and at the same time it is puzzling that the young generation of artists lives in the shadow of the end, and the older ones, already feeling it, almost tangibly claim immortality. The paradox of comprehending the time of the two generations that are at polar stages of life is striking.

Lenka Klodova realized a performance based on balance. She stepped onto the balance beam, laden with luggage - a suitcase, a bag and a purse equal to her own weight. She walked slowly to the other side of the wooden beam and placed everything in her hands at the end. She went back to the other side and began to slowly, methodically take off more items of her clothes and throw them one by one on the luggage in front of them. She gradually added weight to the other side of the beam. When she got rid of all her clothes, she began to balance subtly. She moved in a sophisticated way, resembling meditation or breathing exercises. Things on the other side were still in place. At some point it accelerated and they started to fall. The artist's movement has become dynamic and wild. The performance ended when all the things were on the floor. It was a classic operation with matter, using the possibilities and strength of your own body. In this sense, the artist referred to the tradition of performance art. Nudity revealed the body in an affirmative way. For years, the artist has been running the Festival of Naked Forms in Prague, in which the naked body of a performance artist becomes a starting point for non-physical considerations. Here the body appeared as a place of concentration of various forces of gravity. In her performance, Klodova touched on the problem of maintaining balance - in life and in the roles imposed, dependence and separation from objects, the ability to control reality instead of being influenced by it.

Anna Rutkowska based her action on methods of working with the body and mind straight from the academies and Eastern medicine, using both new media and ancient self-healing practices. Her performance was a mix of a coaching session, a lecture by a recognized professor from a respected university, therapy and a spiritualist session. The artist commented on the knowledge transmitted ex cathedra by authorities from various sides. The distribution of this wisdom was synonymous with Tadeusz Kantor's finger pointing as a way of directing the world (nowadays mainly students of art academies) and the piece Łebe Bebe, played in the form of a performative lecture. The second part of the action was a hypnotic session. It concerned the healing technique of tapping the meridians, fixed points in the body. The artist warned that tapping could be both therapeutic and traumatizing, and she proceeded to act by looking into the blinding spotlight. On the opposite wall she presented a recording of contrasted colors, on which she did the same. Simple gestures illuminated by theatrical light appeared as strange self-exorcisms. The artist showed the spectrum of influencing the other person by means of more or less literal techniques of exerting influence - it is not without significance that she is a student of the Academy of Arts, so the teaching processes are close to her. It refers to the master-student relationship, which is often a field of abuse, and to the field of art as an experiment, which also creates a field of uncontrolled mental manipulation (especially in the context of senior professors and young art adepts).

Vala T. Foltyn has realized an extraordinary mystery. She walked between the audience spraying incense. In the gallery there was a stuffy, church smell, accompanied by the soothing sounds of familiar music. The master of ceremony, dressed in fur and stylish high heels, turned her back to the audience. Against the background of the wall, a black and white film was shown, documentation of the events organized in memory of Wala's friend, Aneta Żukowska, who died last year. Wala began her story. She talked about an old house in Krakow, which is a hundred years old and full of memories. The future Pope Karol Wojtyła, who was active in an alternative theater, lived nearby. Simona Kossak also came here, before she left to live among animals in the Białowieża Forest. The polymath and intellectual Wincenty Lutosławski, who made an attempt to develop a Polish national philosophical system that combined Platonic idealism with the messianism of Polish Romanticism, lived next door. He was also a pioneer of yoga in Poland. It is hardly surprising that the villa, infused with such energies for years, served Wali as a space for creative work, a place for creative exchange, workshops and concerts, a place where life was vibrant. Currently, the house has been bought by a developer and stands dead. Wala Fołtyn's performance is an expression of longing and a tribute to the place and people. She is an advocate of queering tradition and body affirmation, seeing both spheres as closely connected. It also expresses a rebellion against the fascist tendencies that regulate the norms of behavior and obligatory being in the world. Vala Dalai Lama, a neighbor of John Paul II, spreads the philosophy of love, but in her voice you can also hear bitter reflection and disappointment with the world. For this reason, he turns inward, looking for his own way to holiness beyond the established canons. 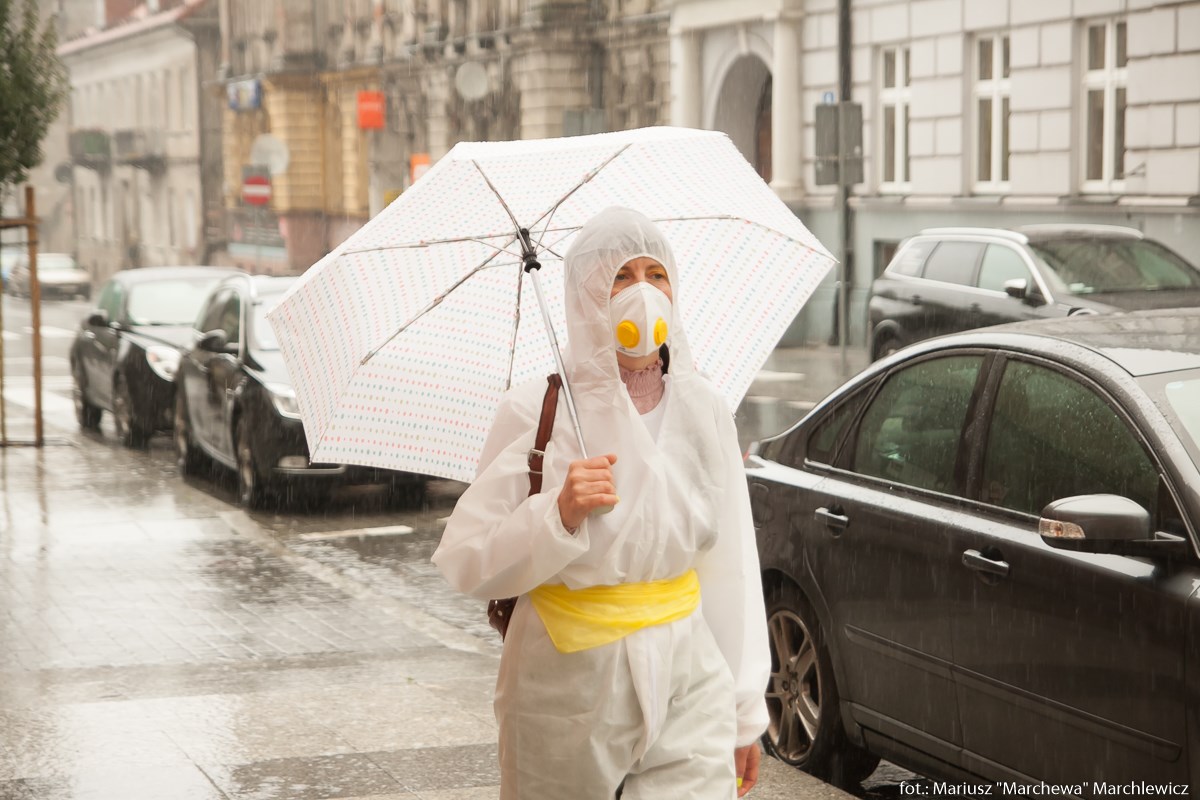 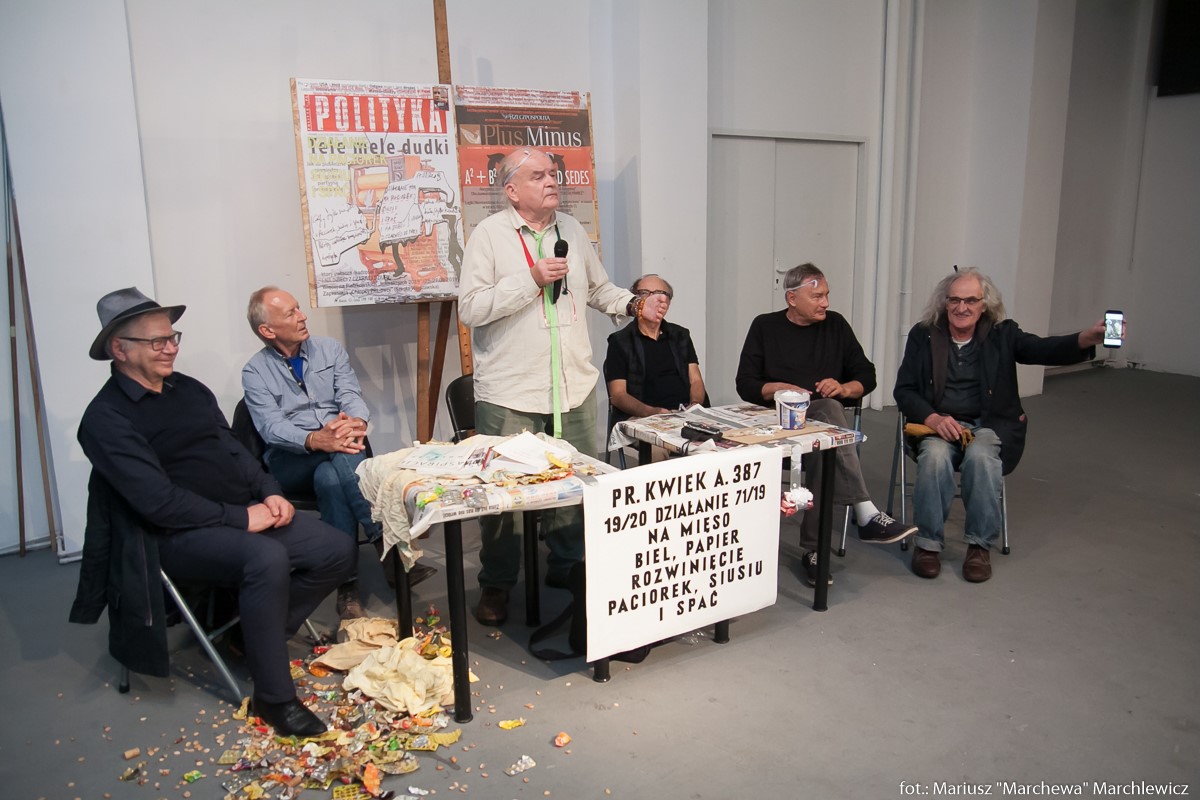 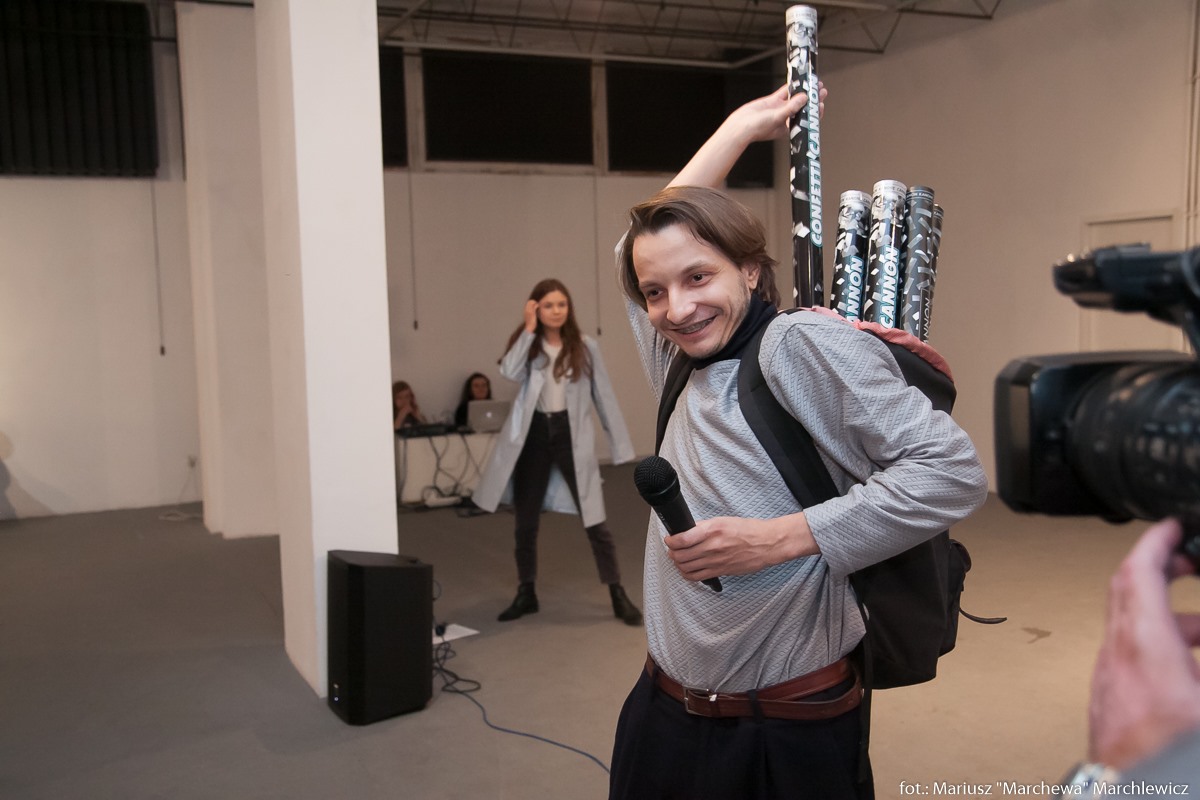 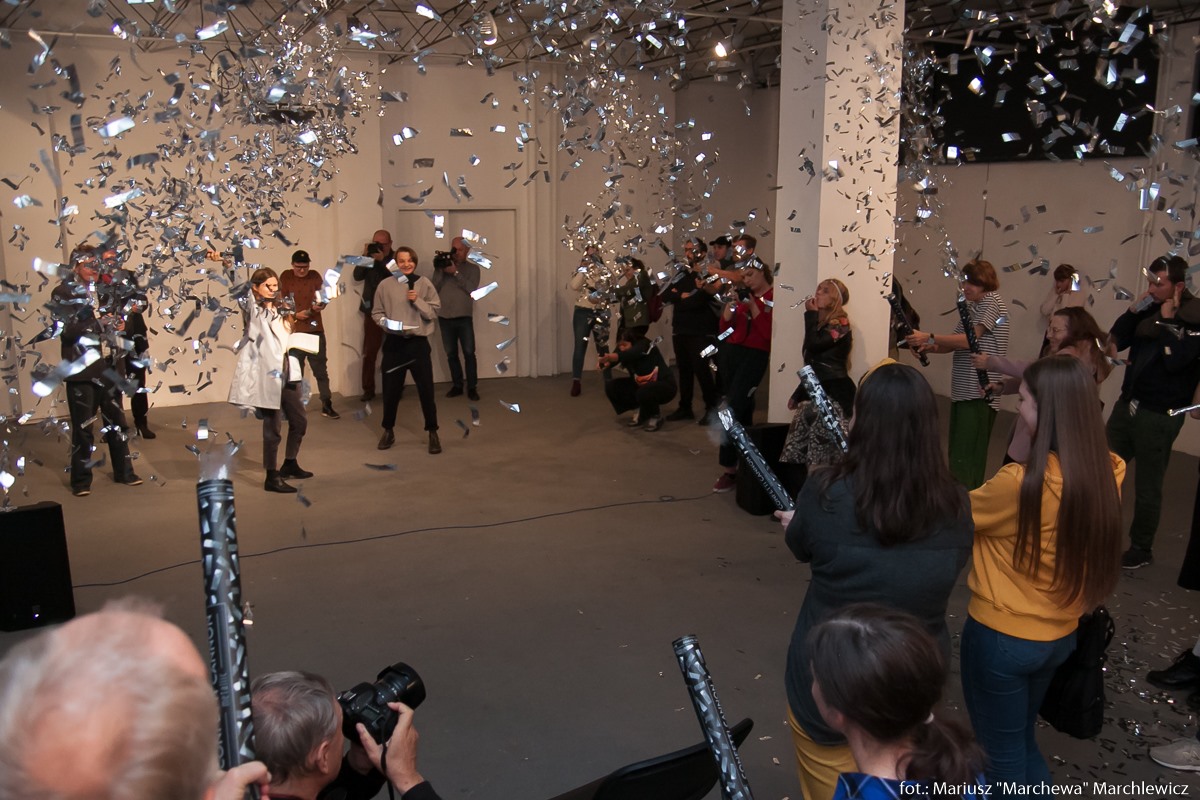 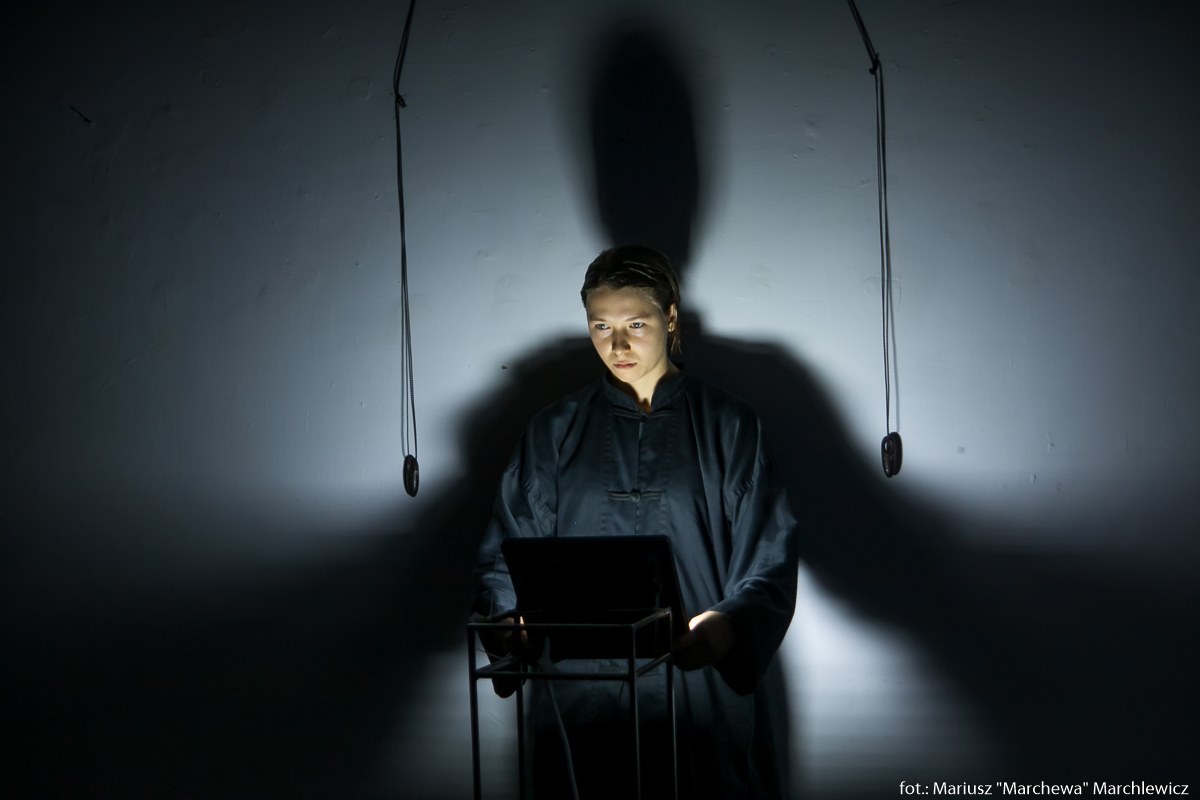 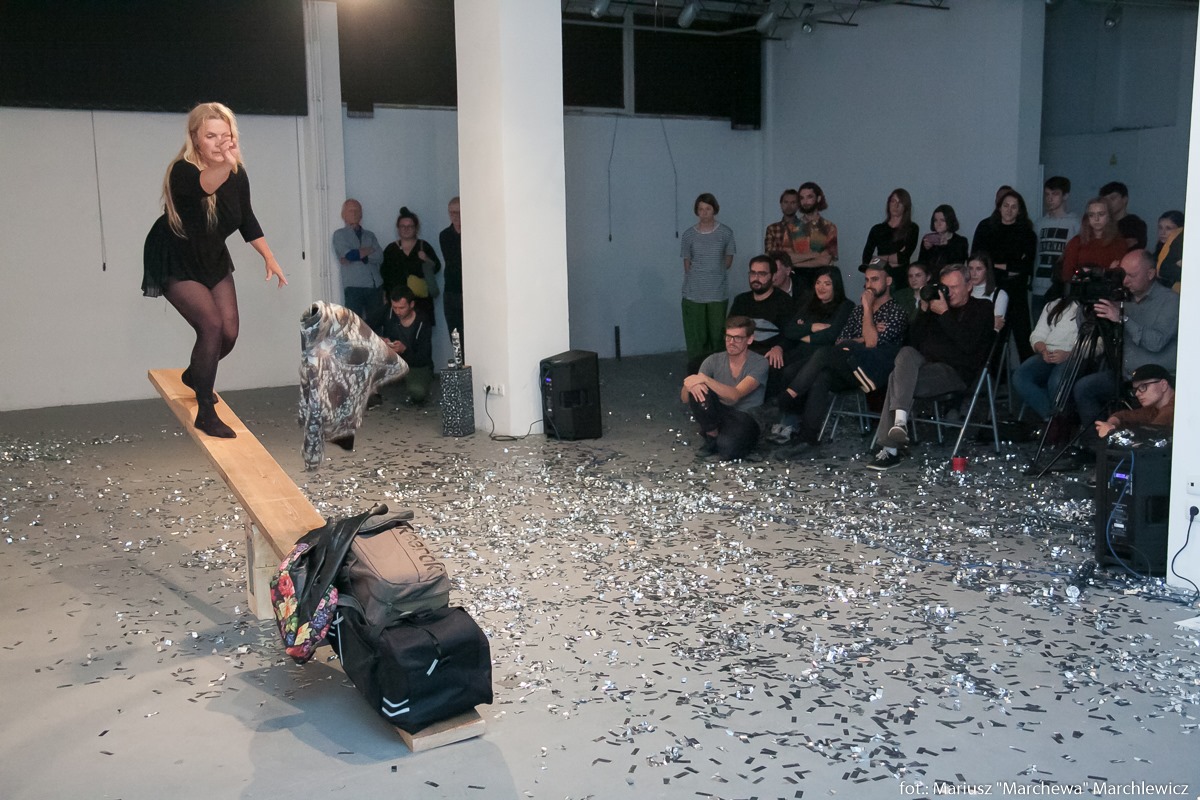 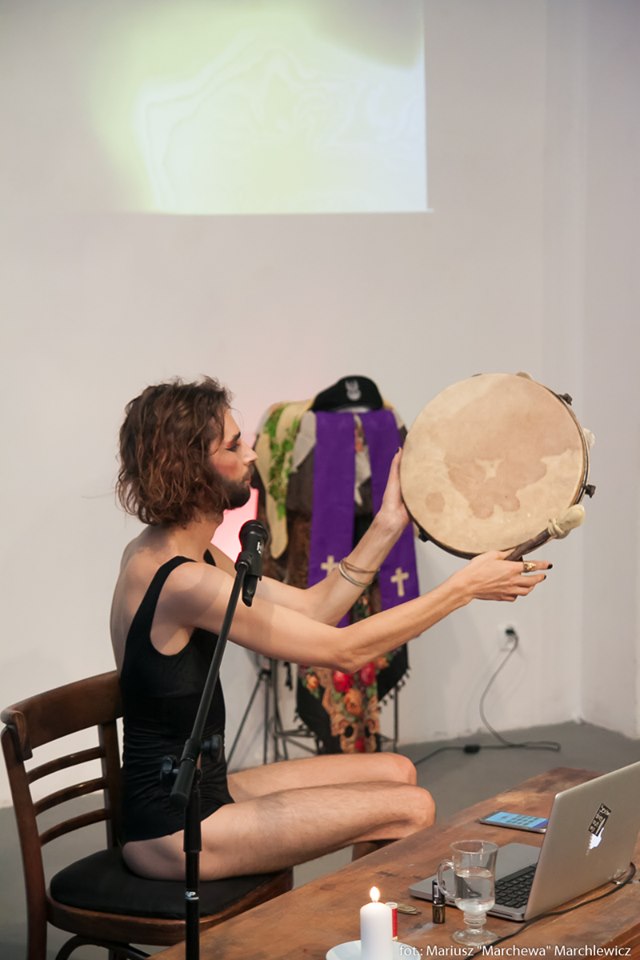