First Day of the Interactions 2019 Festival

The first day of the Interactions festival was marked by intergenerational meetings. "Boys of the People's Republic of Poland versus Children of the Black Hole" - this year's festival slogan and "Time diffusions" - the exhibition prepared by Grzegorz Borkowski are two intertwining signals that art is wider than the generation and trends of the epoch. It takes place in a non-linear space-time - returns, connections, and dialogues are possible in it. This is the idea behind Interakcja - a performance festival with a long tradition, which is revealed in the mutual contact between artists and the audience, confronting attitudes and building a network of connections.

At the exhibition "Diffusions of Time" Grzegorz Borkowski shows various types of connections between Polish art of the 1970s and contemporary performative activities. The concept of physical, related to the uncontrolled permeation of particles, applies to the phenomena in art that take place in the process. They are of a different nature. Some show how the linguistic reality reflects the absurdity of the present (Zosia Kuligowska / Leszek Przyjemski). Others refer to reenactments, i.e. using their own performances from the past in order to supplement them with a contemporary commentary (Ewa Bloom-Kwiatkowska / Angelika Fojtuch). Still others concern the study of the phenomena of the work of one's own body, which fascinate performance artists regardless of the context of time (Paweł Kwiek / Natalia Lisova). The exhibition is dense with threads and prompts us to penetrate the relationships between individual works, which Grzegorz Borkowski arranged in a very thoughtful way. It turns out that some topics do not lose their relevance - despite the passage of time and political contexts. We will always be close to our body and its experience, which is the most primal and invariably fascinating. This is clearly visible during the video performance "Breath" (2018) by Natalia Lisova and "Video and breath" (1978) by Paweł Kwiek. They both show the synchrony of the breath and the object, space and new technologies.
They express the coexistence of matter and the mutual dependence between the body and what surrounds it and what is a form of its extension. A similar theme is taken up by Angelika Fojtuch in the performance "3 dots by Hieronim Bosch" (2007/2019), which turns a functional, vertical body into a creeping pupa with impaired, horizontal mobility. He invokes Bosch's paintings in which human figures appear as if they emerged from dreams. The artist created a visual situation that finally brought Bosch's visions to life in the small Dutch town of Hertogenbosch. It infected a reality that for a moment began to function completely differently than before. The recording of the performance can be seen at the exhibition. Another current topic turns out to be language codes in the form of slogans, slogans, bon mots, clichéd phrases and song titles. Both Zosia Kuligowska and Leszek Przyjemski work with the word, researching its power and function as a medium of communication. Przyjemski referred to various forms of polite refusal, such as: "Leszek, you dreamed about it, but it's not the time ...", showing various forms of censorship of the 1970s. Zosia Kuligowska and Wojtek Bernatowicz distilled random phrases from their sound performances that reflect observations, feelings , fears and aspirations. Another theme discussed at the exhibition is artistic identity. Ewa Bloom Kwiatkowska talks about it through the prism of operating with the burning of her installations in the face of the breakthrough of 1989. The spectacular action showed that a certain scheme was exhausted, some part was abandoned and space was freed for new ones. There is also an interesting game between the pathos of ideology and anarchic actions, which operate in the same spectacular poetics. Zbigniew Warpechowski watches over everything in the photo from the performance "Dialogue with Death" (1976), in which he tried to imagine the future perfect tense.

Barbara Konopka and Weronika Kami invited viewers to a felicitation, prepared especially for Przemysław Kwiek. It is an original kind of affirmative performance, the aim of which is to honor the nestor of the Polish avant-garde. Felicitation literally means a wish for happiness. It has the character of a homage à, but this kind of homage takes the form of an autonomous concert that has its own rules. In addition, felicitation is also a commemoration of Aunt Felicja, who was a wonderfully independent nonconformist. All these meanings are combined in a formula developed by the artist. So far, several felicitations have taken place, incl. for Józef Robakowski and Zdzisław Piernik. Tuesday's performance of the collective began the 21st Interactions festival. Everything took place in a feast of colors and sounds, an atmosphere of inter-species lightness ("we are not artists, we are not even human"). A fluorescent inscription appeared on the transparent foil: "Only love bends light, so only it creates". The artists created visual and sound situations that sucked the viewers into a fantasy world, the only rule being the fluidity of forms, improvisation and mutual interaction. There were echoes of Kwiek's former actions as part of the KwieKulik duo in the 1970s. However, there was no simple one-to-one translation, acting out the reality of a performance. The traces of "Activities with Dobromierz" or "Mojżesz" took the form of distant reminiscences, immersed in magma, presented in camp aesthetics, which distorted and made them unreal. Playing the violin was mixed with the sounds of wind instruments and unusual percussion instruments, which created a cosmic audial space and deepened the mood of amazingness. The psychoanalytic category of das Unheimliche is a good reflection of the unique, extraterrestrial environment that the artists have built. Music of the spheres and jazz, gold, bugs and strings - all the elements had their place in it. Volunteers who turned into hybrid creatures were also involved in the action. Przemysław Kwiek commented in his honor in a characteristic way: "I was embarrassed, but the reviews were good." 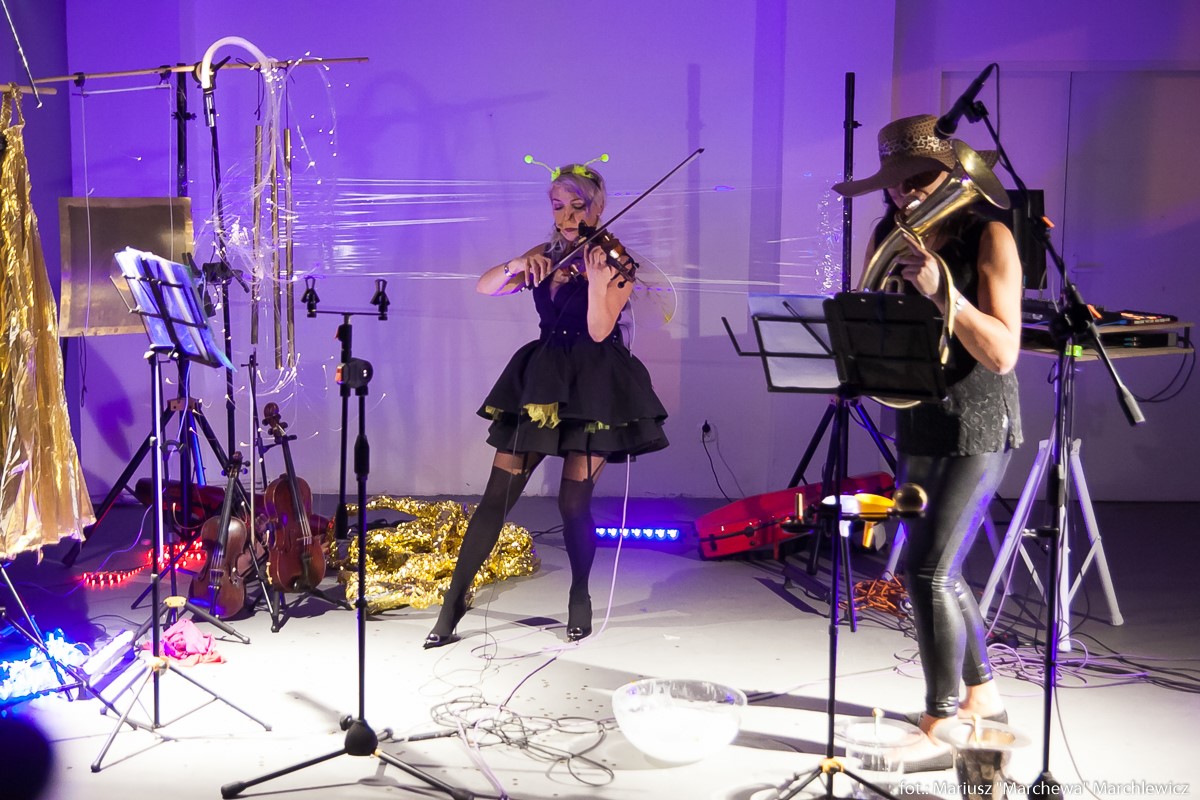 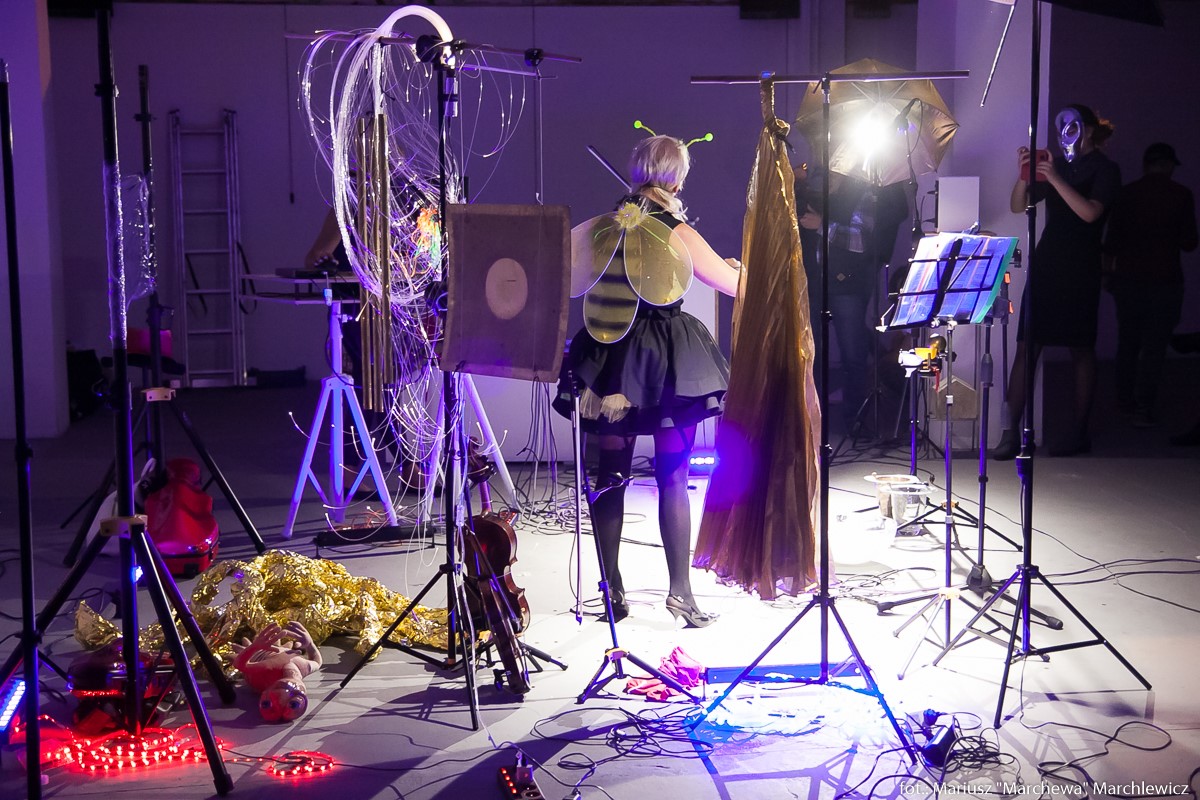 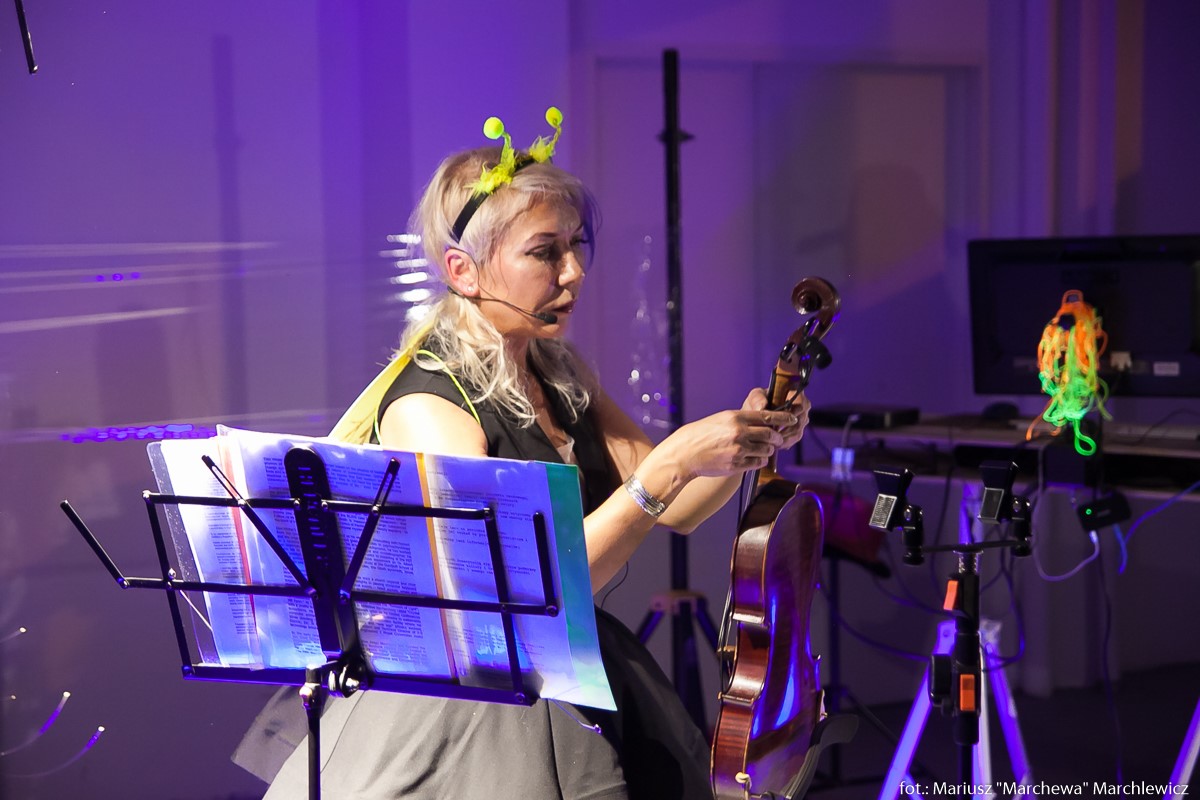