The first day of the festival - report

During the Interaction, Stelarc, standing in front of the laptop and the scanner registering his movements, with the use of hand gestures, steered the avatar displayed from the projector on the screen behind the artist. Stelarc's movements in real space evoked specific reactions of the avatar in virtual space, e.g. if the artist raised his left hand, the silhouette on the screen would roll backwards.

After this action, Stelarc gave a kind of manifesto in which he explained the idea behind his art. The body does not function as an integral whole. Our bodies are infected with technology, prostheses, and implants. We also don't exist in one place and time because we can have a second life in cyberspace. One body can be controlled by another. As Stelarc spoke, an avatar silhouette was projected behind him, reflecting his body movements. The presentation of an additional ear, which the artist has? Grown? on his left forearm. The ear was designed as a kind of device for transmitting the sounds recorded by it to the Internet.

Michałowska started her performance by showing a film from a performance she had made a few days earlier. In it, she juxtaposed the sound of sawn nails, unpleasant to the ear, with the sounds of a melody played on the piano. Long nails interfere with the game, so the artist saw them harder and harder, to the point of blood to play better. So she showed the aspect of training, disciplining the body of the performer of a piece that music recipients do not think about.

In the performance at Interactions, the artist dressed in white knelt down in front of the audience, took off her shoes and glasses, and poured red clay in front of her. Then, in an atmosphere of concentration and silence, she stirred it up using her own saliva. She sealed her eyes with mixed clay. When she sealed her eyes so that she could no longer see anything, she got up and entered the audience space. Maybe she wanted to make contact with the audience by touch, but it is more likely that she was interested in non-visual exploration of the space, because the people and the elements arranged in it served as landmarks. Leaving the audience's field of view, she finished the performance.

Comparing the action performed with the performance for the camera presented in the film, the interest in the body, and above all the limitations resulting from it, comes to the fore in Michałowska's activities.

Herma Auguste Wittstock also based her performance on the use of her own body. The naked artist, lying on ropes suspended from the ceiling, several dozen centimeters above the floor, experienced not only the pain caused by the ropes cutting into her body. The necessity to remain in this position also caused tension. A bottle of yellow dishwashing liquid hung over her head, and it dripped into the artist's open mouth until the bottle emptied. Yellow liquid spilling from the mouth ran to the floor. The artist ended the performance by releasing soap bubbles from her mouth. She slowly got up from the uncomfortable position in which she lasted for several minutes. There was tremendous effort on her face, and the lines of the ropes were visible on the rest of her body.

In this case, the performer seems to play a special game with the audience? shows the audience the pain experienced by the naked body in which the ropes are cut, juxtaposing it with the visual appearance of the painting based on intense color combinations (the artist's red, long hair and bright yellow-green liquid). Wittstock put the viewers in a situation in which they are aware of the pain experienced by the artist, but at the same time feel the pleasure of looking at a visually tasteful stage.

Roi Vaara started his performance by presenting instructions on? How to wear your leg ?. He showed what steps should be performed in order to carry the leg properly. He also introduced the possibility of using a third leg, which in his case was that of a female mannequin. This leg also had to be worn. Artist? Equipped? in the third leg, he showed the audience the possibilities of using it, both static and more dynamic.

Later, the artist referred to Finland - his native country, where there are a lot of swamps, so in order to walk on them safely, you need to wear rubber boots. Saying that he changed his shoes - polished? Patent leather shoes? changed into rubber boots. It was also then that he activated the sound - he connected the loudspeakers from which the rhythmic sound of a splash, produced by a man walking in the marshes, was emitted. Walking to the rhythm of the recorded sounds, all the time supporting his third leg, he left the gallery, walked along the street and returned to the building, where he ended the action.

Roi Vaara, using the strategy of the absurd, draws attention to the irrationality of the established world order, the conventionality of norms, often beyond reasonable categories, commonly taken for granted. He reverses this order, analyzing such a simple activity as walking. The element that disturbs the established order is in this case the third leg.

The performance of Istvan Kantor was based on a strong expression of gesture and action with props. The action was accompanied by loud techno music that gave it a rhythm. Two parts can be distinguished in the structure of his speech. The first, the main one, in which the artist acted in front of the audience, and the second, where he drew viewers into action. During the action, the artist changed his clothes twice - Kantor started a performance? Disguised as a Bolshevik - a revolutionist? - in a worn, green coat and a cap with a five-pointed star. The outfit was completed with a red flag hung on a stick - a branch torn off a tree.

The artist performed several paraphrases of Leonard Cohen's works to the rhythm of techno, interwoven with commentaries. The performance showed an escalation of activities related to the body. Kantor started with expressing his voice, and then made a series of symbolic gestures in which he used props and involved his body, e.g. he wrapped a red flag around his head, fell to the floor, and stuck a syringe needle in his hand. From time to time he repeated a series of symbolic gestures - the sign of the cross, victory, etc. During the performance he also wrote two slogans:? Museum prison? and? I never do boring art ?. The artist not only used props on his own body, but also on the surroundings - he tore off the plaster from the wall with a pitchfork. Finally, he put on a white shirt and jacket (he had changed clothes several times before) - so prepared he poured gasoline and set fire to a piece of wood arranged like a ramp on two chairs. He stood on his hands. In this position he reached the fire and fell, breaking the burning stick with his body. In the second part of the action, he stood against the wall with a group of the audience that remained? shot.

The key to Kantor's performance was the spirit of revolution, energy, fighting with the existing reality, disagreement with the surrounding world, expressed in the extraordinary dynamics and energy of this action. On the one hand, the artist used propaganda tricks - shouting, slogans, appropriate music, on the other - elements of joke, irony and grotesque were felt in his action. Of course, the description of performance will never replace the experience "live", as it is the basis of this type of art, but it can in some way bring closer the essence and structure of specific activities. In the case of Kantor, however, it is particularly difficult to convey the character of his action in a review, which strongly engages the emotions of the viewers. 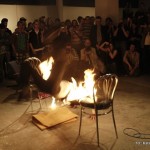 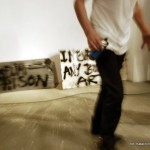 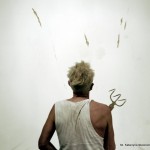 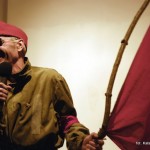 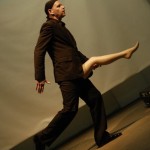 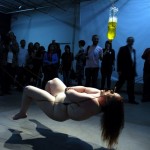 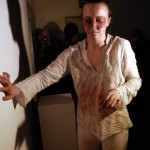 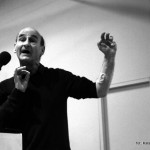 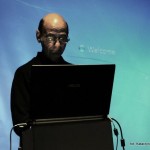 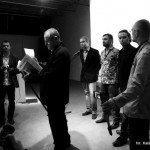