He was born in 1953 in Warsaw. He studied at the Faculty of Sculpture and Interior Design at the Academy of Fine Arts in Warsaw (1974-1979). Intermedia artist, uses various means and techniques. In the 1970s, as a participant in the neo-avant-garde movement, he made conceptual film and photographic works. In the 1980s, he created series of paintings, installations, performances and artistic graffiti (stencils and drawings), pioneering in Poland. In the 1990s, he created sculptural and architectural works in public space, as well as spatial objects and installations.
Author of about 150 exhibitions and individual shows. He has participated in over 120 exhibitions and group presentations.
Curator and co-curator of about 20 contemporary art exhibitions (including "Form and Sound", Mospan Gallery, Warsaw 1978; "Now and beyond time", Pracownia Dziekanka, Warsaw 1986); "The Art of Template", Center for Contemporary Art Ujazdowski Castle, Warsaw 1990; "Aporie I", BWA Gallery Jelenia Góra 2002; "Aporie II", BWA Gallery Zielona Góra 2002; "Koany in the power plant", MCSW "Elektrownia" in Radom 2009).
Author of texts on contemporary art. He has published the books: "Pracownia Dziekanka 1976 - 1987", (ASP Warsaw 1990); "A work of art as a koan", (MCSW "Elektrownia", Radom 2009); album (with M. Rutkiewicz) "Graffiti in Poland 1940 - 2010" (Carta Blanca, Warsaw 2011).
In the years 1979 - 1987 he ran Pracownia Dziekanka, an interdisciplinary artistic and educational center of the Academy of Fine Arts and the Academy of Music in Warsaw. In 1984-1988 he lived in New York and was a guest lecturer at art academies in the USA. In 1992-2003 he ran the Intermedia Studio at the Institute of Visual Arts in Zielona Góra. Currently, he runs the Multimedia Studio at the Institute of Fine Arts of the Jan Kochanowski University in Kielce. He is a professor of fine arts.
Works in the collections of: Holland Experimental Film, Amsterdam; The National Museum in Wrocław; Museum of the Academy of Fine Arts in Warsaw; Muzej Suvremene Umjetnosti in Zagreb; Center for Contemporary Art Ujazdowski Castle in Warsaw, the District Museum in Jelenia Góra, the District Museum in Bydgoszcz; The Świętokrzyskie Society of Fine Arts "Zachęta" in Kielce; Museum of Modern Art in Warsaw, National Museum in Warsaw, MCSW "Elektrownia" in Radom.
He lives in Warsaw and in the Izera Mountains. 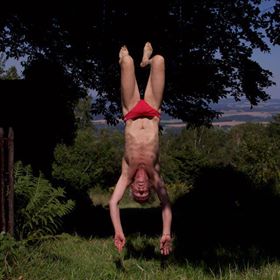