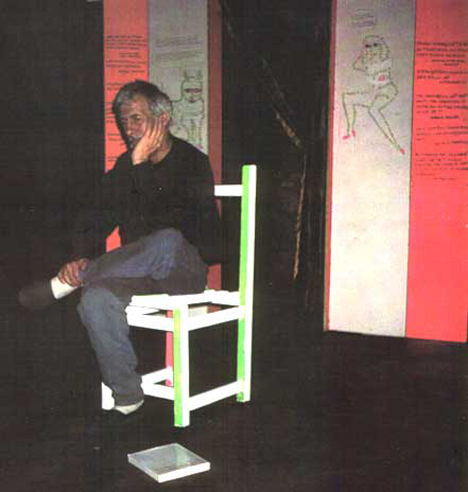 On the one hand, I took up the performance because of my contextual theory, prostate | but also because of my experience with dance, that is body movement, gesture and with the use of these means I made a performance.

For me, the text, installation, photos and exhibition resulting from it, as well as live action create a whole. But it is characteristic of present-day art.

What is the fundamental difference between art today and art in the past? Well, formerly the role of the viewer was to recognize what the artist wanted to say. Spectator or listener did not have an active role, but a passive one. Today it has an active role. Either you turn it on, as sometimes in a performance, or leave room for interpretation. He can find something for himself in art. Since everything changes quickly, our meetings are short, what counts is the place, atmosphere and time; not some permanent being, but being in a given moment, here and now. And also the evaluation and feeling of what is now. We don't discuss values, we don't say what is right and what is not. Everyone has their own criteria and they are not subject to evaluation, because we do not have a common point of view. Yes, we like something or not, but it's our private business. We don't have a common language. We meet people of different cultures. Art works now, right now - it causes a certain emotional state, it is associated with something. We construct reality ourselves, not necessarily in line with the reality in which we previously functioned. This is the case at performance festivals.

Jan Świdziński was born on May 23, 1923 in Bydgoszcz, but he works and lives in Warsaw almost all his life. During the war, he studied architecture at the Warsaw University of Technology. In 1947, he began studies at the then newly established College of Fine Arts - later transformed into the Academy of Fine Arts. He enters Cybis's painting studio. At the same time, he is also studying graphics with Kulisiewicz. In the 1950s, apart from painting, he also works for the magazine "Razem"; also begins cooperation with the Art Institute in Warsaw. He then travels to Spain and Morocco where he studies the art of Islam; he is also interested in Chinese calligraphy. At the beginning of the 1970s, he started organizing various types of artistic interventions and demonstrations, he also established cooperation with many groups: Net, Permafo, Warsztat Formy Filmowej. He is a co-founder of the Mała Gallery and the "Zero" museum in Warsaw, he also becomes a member of the program board of the gallery: Współczesna, Remont, Zero (Warsaw), Galeria Sztuki Współczesnej (Wrocław), Pole Gry (Bolesławiec). In 1970, he published an article: "The Controversy over the Existence of Art", which becomes the first serious step towards the theoretical ordering of his existing aesthetic concepts. In August 1976 he published a manifesto "Art as Contextual Art" in Lund, Sweden. At the same time, also in Sweden, the "Contextual Art Exhibition" is being organized. From that moment on, Świdziński's international artistic and theoretical activity gains momentum. In 1976, an international conference on the Manifesto of Contextual Art is held by The Center for Experimental Art And Communication CEAC in Toronto. The list of participants includes groups: "Art Sociologique", "Art And Language", "Artist Meeting for Social Change", "The Fox". In 1977, it organizes the International Conference "Art as Action in the Context of Reality" with the participation of artists and critics from 35 countries. Since then, until today, he has been the organizer, co-organizer or participant of several dozen conferences, meetings, festivals, collective and individual exhibitions in Poland and abroad (including cyclical ones such as "Interactions" in Piotrków Trybunalski since 1998 - thanks to him he becomes an honorary resident of this city . 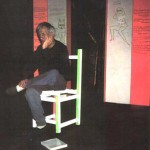 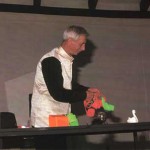