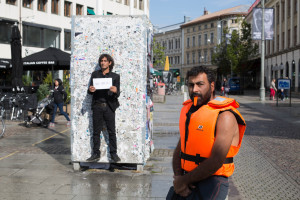 Ali Al Fatlawi and Wathiq Al Ameri were born in 1972 in Baghdad, Iraq. Since 1997, they live and work in Zurich, Switzerland.

Together they create performances that reflect their history. They present a picture of exile, combining a critical perspective with hope for their return to their homeland from emigration. The art they create deals with the subject of confrontation and war. Ali and Wathiq received classical education at the University of Fine Arts in Baghdad. A few years ago, they decided to flee the regime of Saddam Hussein and began their odyssey across the Iraqi Jordanian border, for which they copied classical and Arab art until they had raised enough funds to reach Sudan. From there, they traveled by truck to the Sahara desert to Libya, from where they finally managed to get to Switzerland, where they continued their education at the School for Art and Media Design F + F (F + F Schule für Kunst und Mediendesign). They also founded the Urnamo group with Wamidh Al Ameri to exchange ideas and create unique images. For them, performance is a dynamic and experimental practice that can bring rich and unpredictable results. Their work is maintained and repeated in many ways, depending on the materials available, using a variety of themes. With other art forms, such opportunities would be unattainable.

Their performances work to create an image in a moment, without translating it into words. Views, moments, change, traversing places and memorization give meaning to the whole process and are elements that artists hope to communicate to viewers. The performances address their message towards the emotions of the recipients rather than towards their intellect, providing the possibility of pure replacement.