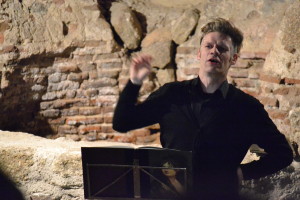 Born in Iceland in 1975, Kristinsson has been creating performance art since 1999, when he moved to Amsterdam to study at the Gerrit Rietveld Academy. His direction was focused on practicing performance art. He received his BA in Humanities in 2033. Between 2005-2007 he performed with the interdisciplinary performance group "Oblivia". He was awarded a master's degree in fine arts at the Helsinki Academy of Fine Arts. He lives and works in Helsinki to this day.

Language and body became the basic and even sculptural form of his performance. Through a systematic way of speaking, the variety of topics exchanged becomes a mixture of specific poetry and music, while its appearance faces the test when it reaches the limits of the inanimate.