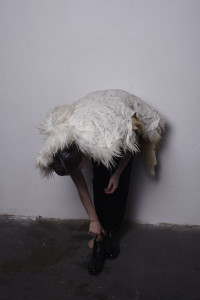 Léann Herlihy is an Irish artist permanently living in Poland. Her work is characterized by an unspeakable beginning and end, health because both of these fundamental beings are equally important. Not everyone is able to empathize with her art due to the rejection of? Labels? or the media. Her work is characterized by diversity: she uses performance art, objects, installations, writing, and projects that require in-depth research. The aim is to show that the barely visible ingredient can become the most important element from the point of view and survival of the entire composition. The indifferent components of the structure are presented as animated, miraculous objects that can be understood in the sense of being able to operate through their own micro-religious forces without the assistance of an artist. All these structures are usually fixed with a minimum number of points where the force distribution and the dramatic importance of the climax are of paramount importance. Symbolism, along with the use of endurance (of an object or an artist), marks the excessive stretching of time; all this is reinforced by a symbiotic relationship with the audience, where the actual act of their constant observation becomes a ritual in itself.