Beate Linne is a visual artist born in 1967 in Germany. He mainly deals with performance and installation. She studied fine arts, architecture, pedagogy as well as German philology and German literature at the University of Kassel, Fachhochschule Hildesheim and the University of Hildesheim. Since 2007, he has performed internationally, conducts workshops and lectures, and co-organizes the International Festival of Performance Art Blow!

Linne's work explores the heart of life's problems and the condition of being human by creating moving actions with her body. Her performances often test her own physical and mental boundaries, questioning social attitudes and learned norms of behavior.
By using her body as a tool to create powerful moving images, Linne sees performance as an opportunity to express herself in her own ongoing exploration of the concept of freedom and convention of thought. At the heart of her work is meeting and exchanging people: the possibility of initiating alternative and bold thought processes.
More information: beatelinne.blogspot.de 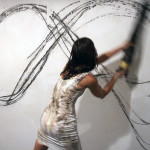 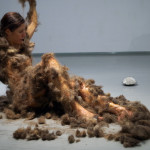